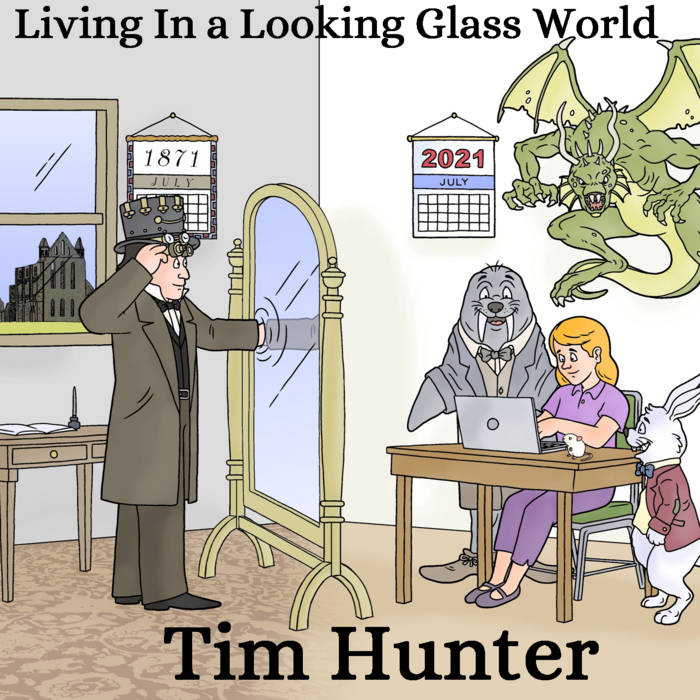 'plenty of Carrollian references in the songs'... 'If you would like a Lewis Carroll story related in a similar way to 'War Of The Worlds' by Jeff Wayne then this album will be of interest'...'A nice soundtrack to Summer on a warm afternoon'..'The CD artwork supports the overall fun feeling to the album.' 'Tea Tray In The Sky' has a dreamy disco sound to it and the chorus will stay with you for a long time afterwards. (Review in Bandersnatch, Newsletter of the Lewis Carroll Society.)

www.velvetthunder.co.uk/tim-hunter-living-in-a-looking-glass-world-northern-soundscapes-records/
'..it is a soundscape created with what to me is quite a 1980’s sound and arrangement..remind(s) me of Deacon Blue, and a sort of pastoral, less beat-driven, Human League! The overall effect is strangely soothing whilst telling the tale, the music kind of washes over you while you’re following the story-line, with a strangely satisfying conclusion! Tim has carved himself an unusual niche here ...he’s written, performed and told the story with considerable panache!'


Held captive by the Red Queen, and trapped in a strange world full of microchips and bytes, a young girl is rescued from the other side of The Looking Glass, back to the 1870s, where she belongs…

Disappear into the rabbit hole and journey into Wonderland with Tim Hunter’s new mini-opera ‘Living in a Looking Glass World’….

You’ll know Alice’s story, but what do you know of her creator, Lewis
Carroll, and his connection to Whitby? Tim Hunter, through this collection of spellbinding songs, with their haunting melodies and fantastical lyrics, takes listeners back to 1871, when Carroll made his last documented visit to the North Yorkshire town.
Staying at William Smith’s hotel, Carroll (real name Charles Dodgson), whose family home was in Richmondshire, was a frequent visitor to Whitby. On this visit, to attend his brother’s wedding in Sleights, Carroll is persuaded to save Smith’s young daughter, Sarah; held captive by the Red Queen, Sarah is trapped in 2021 after following her nose Through The Looking Glass.
Travelling into the future to rescue Sarah, Carroll finalises two of his better-known poems: ‘Jabberwocky’ and ‘The Walrus And The Carpenter’. Still one of our most popular classics 150 years after publication, Carroll’s story travels through time in more ways than one.

With this album, Tim Hunter adds yet another dimension…

‘Living In A Looking Glass World’ is a work of fiction. Any references to historical events, real people, or real places are used fictitiously. Other names, characters, places and events are products of the author’s
imagination, and any resemblance to actual events, places or persons, living or dead (or fictional), is entirely coincidental.

All rights reserved. This work is registered with the UK Copyright Service: Registration No:
284728845

Many thanks to the Lewis Carroll Society for
being an invaluable source of information:
www.lewiscarrollsociety.org.uk