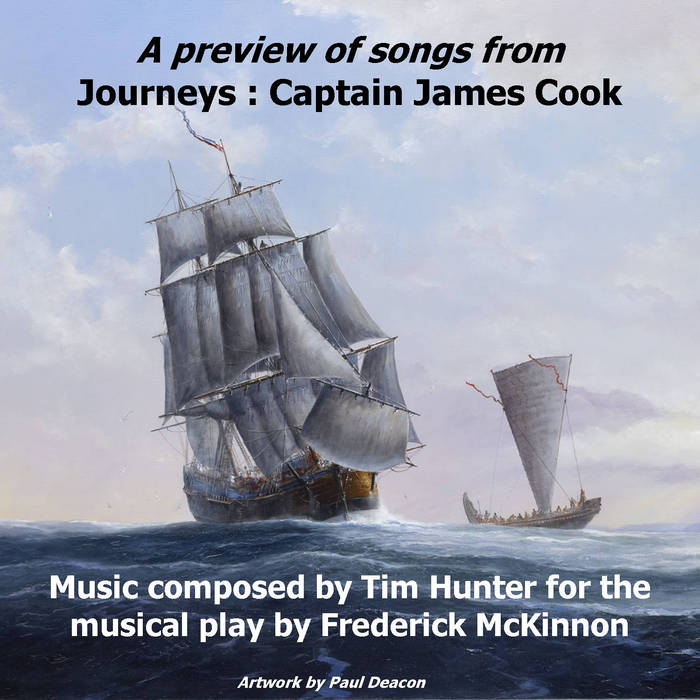 James Cook rose from humble origins in North Yorkshire to become one of the world’s greatest explorers. On his three great Pacific voyages, he re-drew the map of the world and paved the way for the peoples of Hawaii, New Zealand, Australia, French Polynesia and British Columbia to no longer live in global isolation. Journeys: Captain James Cook is a full-length musical play about Captain Cook’s accomplishments and his demise as well as the loving relationship between him and his wife Elizabeth. This CD contains a selection of six songs from the play: focusing on his initial ambitions, his love for Elizabeth and, finally, his tragic death in Hawaii.

2. Loyalty and Love: Back from service in Canada with the British Navy and now based in London’s East End, James Cook at 34 is preparing to propose marriage to Elizabeth Batts, the 21-year-old daughter of the proprietor of The Bell Inn, a pub he liked to frequent. Tim Hunter: Vocals, Guitar, Keyboards.

3. Distant Hearts: Before leaving on his first great Pacific Voyage and not knowing how long he will be away, James--while saying farewell to his wife Elizabeth--points out a star they will both be able to observe during his absence. Sarah Lipman: Vocals; Tim Hunter: Guitar, Keyboards; Additional keyboards: Dan Burnett; Drum programming: Rohan Budd.

4. So Long Gone: While James Cook is still away at sea, Elizabeth returns home after burying their baby daughter and reveals her emotions concerning her husband, who has been gone for two years and eight months. Sarah Lipman: Vocals; Tim Hunter: Guitar, Keyboards; additional keyboards: Dan Burnett.

5. I Am the Man I Have to Be: Despite Elizabeth’s misgivings, James is about to leave on what would be his last great adventure. He and his wife sing a duet sharing their intimate, but sometime conflicting, feelings. Sarah Lipman: Vocals; Tim Hunter: Vocals, Guitar, Keyboards; additional keyboards: Dan Burnett.

Northern Soundscapes is Tim Hunter's music label. He is a singer/songwriter/producer. His musical compositions range from pop ballads through to classic rock and have been enjoyed by audiences both in Europe and the United States.